TLDR; If you’re looking for a small vise and space is a premium on your workbench, the Housolution Universal Table Vise with Swivel Base is a great choice. On the other hand, if you’re working for a vise that will have a permanent place on your bench, you should consider the Yost Vises 5″ Heavy-Duty Double Swivel Rotating Vise.

When you’re building things and need to handle bigger parts, helping hands and small table top holders are not always enough. You will need at some point a more heavy duty vise to hold your parts in place for sanding, filing, hammering, sawing or glueing.

Depending on the jobs you need to do, there are a few elements you want to consider when making your choice:

Of course, the vise you’ll chose depending on to size of the jobs you need to do: you won’t have the same needs for an electronics projects as someone looking at metalworking vises or for a woodworking vise. I will review a variety of vises in this article: 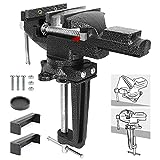 This small vise has many of the same features as the bigger vises: it can swivel 360 degrees, and even have a tiny anvil for some light hammering. It’s jaw opening of 3 inches and throat depth of 3 inches allows it to hold parts that are relatively big.

On the other hand, even if it’s made of cast iron, it’s not that strong: it’s still meant for light work with wood and plastic. The clamp will also limit you, since it’s not as sturdy as a vise that’s bolted on your table. 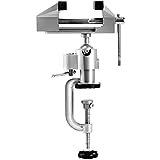 This is a tool that’s for light work such as jewelry, modelling, electronics and the like with it’s aluminum body and rubber-coated jaws. It’s also pretty small with a jaw opening of 2 inches, but on the other hand it’s lightweight and easy to store if you’re looking for a tool for occasional work. It can be positioned in many ways since the head can tilt and swivel, not only turn around like the bigger vises.

With it’s small clamp you’re not going to do any heavy duty cutting or sanding without it moving too much, but it’s a decent tool if you keep in minds its limitations.

If you’re looking for a more standard vise for light clamping and working on a variety of parts, this is a good vise for you. This cast iron vise comes with the standard swivel base, a large anvil. This model has 4-inch wide steel jaws and 4-inch opening, which is small as far as vises that are mounted on a table goes, but still enough for many jobs.

It’s still a nice little home vise for general-purpose work, or if you’re looking for something that has a bit more clamping force for your small projects, including woodworking and some light metalworking.

This bench mounted vise from yost tools is very versatile: in addition to the standard 360 degree swivel base, the head itself can also swivel 360 degrees. On the other hand, due to the swivelling head, the clamped part will be slightly higher than with a more standard vise form factor.

It’s not the most heavy duty vise, but at 4 7/8 inch jaw opening and 37lb, it’s a good compromise between bench space and weight, and will be able to handle most jobs in a home shop. Also, in addition to the standard machinist jaws (which can be replaced), it also features permanent pipe jaws and v-shaped jaws, giving you a lot more options.

This heavy duty bench vise is the one to get if you need to hold really large part or are into heavy metalworking. It’s a big vise at jaw size of 8 inches and a jaw opening of 6 3/8 inches. The replaceable jaw are serrated, and that can deliver up to 8000 pounds of clamping pressure.

In addition to the standard machinist jaws, the pipe jaw can also be useful. All in all, a nice vise if you need to keep large parts tight and secure for hard work (but total overkill for small projects).

For the occasional hammering for a hobbyist working on smaller project, a great option is the Housolution Universal Table Vise with Swivel Base. It’s robust and can handle a decent amount of work, but it won’t take up permanent space on your workbench while still being able to hold reasonably-sized parts.

On the other hand, if you have more space on your bench and are working for a more standard vise for metalworking, woodworking and the like and want to mount it there permanently, you’ll need something that is a bit more heavy-duty. In that case, cast iron bench vises with many options such as the Yost Vises 5″ Heavy-Duty Double Swivel Rotating Vise would be the best bench vise for your workbench.